The Power Of The Three 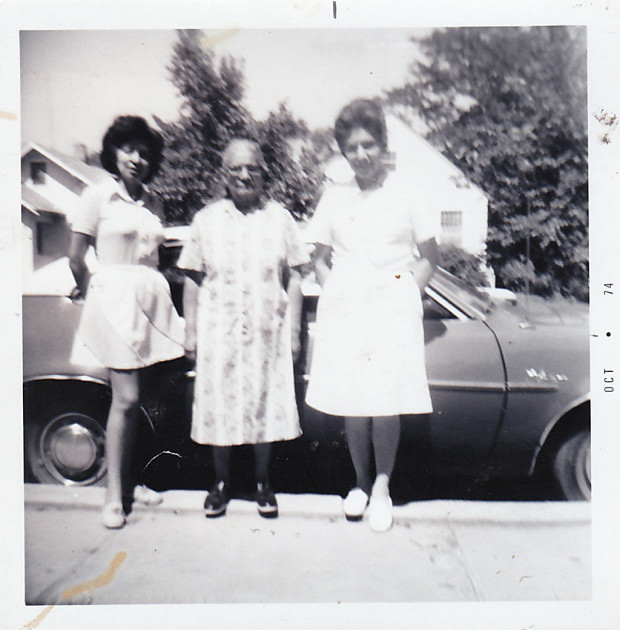 13 May The Power Of The Three

Posted at 11:08h in Connecting With Culture, Encompass by Maria Meier

The edges of the old black and white photo now curl upwards. Its shape is a square, making it difficult to find a frame that will fit. The image is out of focus and grainy –  a result of the technical limitations of the old “Brownie” camera I found that summer day when I was engaged in one of my favorite activities at my grandmother’s house – rummaging through the myriad of old “stuff” that was tucked away in every nook and cranny.

The three pairs of eyes look directly into the lens with a sense of understanding and obligation to eight-year old me as I snap away.

If photos are one of our best records of modern history, then the lack of them is just as powerful a storyteller.  Large gaps of any photos from our family history over years, or in some cases decades, reflect the precarious economic situations and the struggle of daily life they faced where a camera, film and associated costs would have been an unimaginable luxury. I don’t know how much use that old camera actually got when it was first purchased.  But for a one brief moment that summer day it came to life again, and forever captured a simple image that decades later, I am only truly beginning to appreciate.

Once I had an understanding of the treasure I was holding, I wanted to do whatever was necessary to make it functional again.  A trip “uptown” to the drugstore yielded the first miracle of this story. In a rural midwestern town in the years preceding the arrival of Wal-Marts, you had limited shopping options.  That the town pharmacy, which sold all sorts of things beyond what its name would imply, did indeed have film for the old camera, would be now, in reflection, something I would chalk up to “it was meant to be”.

Once armed with a functioning camera, I carefully posed my subjects, the three of them, outside facing the sun, in a line-up fashion, in front of my mom’s Ford Pinto (it was the 70’s).  With hindsight knowledge that I violated every rule of good photography, I was nevertheless proud of the result when we finally got around to developing the film.  At the time, I didn’t fully realize the importance of history, of stories both told and unspoken, of the power of three, the three women who dutifully indulged me for those very few minutes that one summer day.

My mom is on one end wearing a short skirt, her hair styled. Her bent arms and leg hint a recognition of the art of posing.  She is distinct from her older sister and mother, which is fitting given the uniqueness of her life experiences. While growing up, my mother’s family was very poor and into her adult life, she faced all the tribulations that befall women of color in this country.  But, she also benefited from being one of the younger of her siblings. She enjoyed opportunities that the others did not, which helped her go on to become a trailblazer in her own right. This is turn, set me on a path of educational and professional attainment that I likely would not have been able to enjoy without her willingness to break the mold.  Her independence also led her to single-motherhood even though it was far less common or accepted at the time.   However, I think, she would be the first one to admit that she would never have been able to do so without the other two who would always be at her side for the process.

Next to her stands my grandmother, erect, serious, dutiful and whose presence in the photo is miracle number two.  Probably due to culture and some insecurities, Grandma always ran from the camera.  Her direct pose and acquiescence to my request that she be photographed spoke volumes about our relationship.  I recognize the special bond that skips a generation. I also fully recognize that even among all of the others in my family, the relationship between the two of us was unique.  When my mother brought me to her as an infant, Grandma attached herself to me like an anchor in a storm.  She was there to ground me, tie me to a past, a history, a family, and a normalcy in a way that my mother would never be able to do. In this same way, she anchors the photo.  Her quiet presence in the center with an expressionless face masks the extreme depths of sorrow and hardship, and yes, some joy, woven into stories, some of which she shared only with me.

The tallest one in this petite group is my aunt.  Named Aurelia, somewhere along the line she got the nickname, “Birdie”, which stuck.  As a baby, my attempts at calling her came out as “boo boo”, and thus she remained.    Never married, she lived with my grandmother and was omnipresent in my life.  She was a gentle soul and a true saint.  Extremely dedicated to her faith and her family, she was smart and an extremely hard worker who lacked opportunity, and because of that never received anywhere near the recognition or compensation for all she did.  A linchpin for the family, she always kept a pocket calendar where, through the years she recorded birthdays and anniversaries expanding to include each new addition and generation.  That she is the only one really truly smiling in the photo is a reflection of her innate ability to find joy in everything.

Miracle number three is not just that I still have the photo.  Through my many many moves over the years, photos are the one thing I have always been careful about keeping.  No, I believe the real miracle is that after all these years of holding on to this picture, I am finally able to see beyond the fuzzy faces and recognize and appreciate the power of these three.

There is no shortage of symbolism and significance of the number three. References to it are found throughout history and in all parts of the globe; it’s a profoundly important number in Christianity. Three is the only number that is a sum of its parts (1+2=3).

We are all sums of many parts, and with time, the number of parts that have some part in shaping us only increases.  Traditionally though, we usually think of ourselves as the products of two parents.  Because I was not raised in a traditional two-parent household, I have long known, but only now have a more fully understanding, that I am a product not of two, but of the power of three.

Powers and influences linked by blood and spirit are what shaped, formed influenced, and nurtured me.  They brought perspective and values both shared and unique.  And they each left me at distinct stages in my life with an unspoken directive to carry their stories forward if not in words then by actions.

There are no more cards to buy, flowers to send, or last-minute gifts to shop for.  This Mother’s Day, instead, I will reflect and remember.  I will never be able to replicate any of their individual essences, but I will merge and meld and most importantly, celebrate the three, and the way that I am a sum of all their parts.